The Art of Blind Tasting 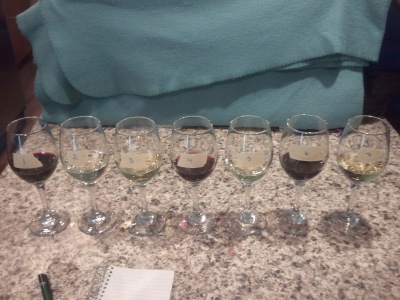 Lately, I’ve been learning the art of blind tasting.  In preparation for my exam in 2 weeks, I’m doing as much as I can so as to train my senses to pick which varietal I’m seeing, smelling and tasting.  It’s not easy.  A few weeks ago, we had a blind tasting in class.  Sure, you get points for describing what you see, smell and taste.  And you could pass with only that!  But there’s something about being able to “Name that Grape”.  Like a good game show, you only win if you guess it successfully.  On that particular day, with one wine, you either get 0 or 100.  I got 100.  Last week, we tried again with four wines.  I’m sorry to say that I only got a mere 25%.  Only one correct guess out of four.  But, I’m ok with that, because now I know attributes of those grapes even better than I did BEFORE that tasting.

On my last day off, I went in search of cheap, single varietals to test myself with.  When you’re blind tasting to help yourself study, getting $50 bottles of wine is really not a good idea.  Get some wines between $8-$15 and you’re good to go!  Try to get a sampling from various countries as well, as each country’s terroir and climate plays into the scents and flavours of the wines.

The idea of blind tasting is so one would not be prejudiced in choosing one country’s wine over anothers. This came into play during the famous Paris Tasting of 1976.  As seen in the movie Bottleshock, I learned how the Old World met the New World in this battle of reds and whites from France, vs. reds and whites from the New World.  Specifically, the United States.  Many aficionados, wine scholars and sommeliers thought nothing could beat the beauty and prestige of their French wines.  So as not to prejudice them in choosing their own country’s wines, they did the tastings blind.  Meaning, they had no idea what was in their glasses.  It was either French wine or American wine.  Based on their senses, they had to rate these wines in different categories, giving points for each.  Lo and behold, to the surprise of an entire country, these small time, up and coming vineyards from Napa Valley, USA, won overall for both reds and whites. It’s been a battle ever since.

And blind tasting, becomes increasingly important for the Wine Student to master.

On Friday, my husband gave me my own blind tasting here at home.  I scored 100%.  Again, with four wines, I was able to indentify all four.  I asked him to repeat this exercise for me this evening as well, using the existing wines, and perhaps adding some others.  He completely fooled me, pouring two of the same wines.  So really, I didn’t have seven varietals, as the picture shows.  Rather, I had only FIVE different varietals, with doubles being given to me!  And I should’ve trusted my senses.  But, I didn’t, and failed miserably, only to get three right of the seven poured.  Did I get the same varietal for the doubles?  No, I didn’t.  In my mind, I thought they were the same.  But how COULD they be? I doubted myself, and I shouldn’t have.

What’s my point in all this?  It’s an art.  An art I have yet to master.  But I’m getting there.  And for anyone out there struggling with blind tasting, don’t worry!  You’re not alone!  It IS difficult, but the more you do it, the better you will become at identifying varietals.

I’ll try again in a couple of days….

This entry was posted in wine. Bookmark the permalink.