Ode to the Malbec

I’m not sure I’m actually using the word “ode” in the right context, however, I chose this title based on the current popularity of the Malbec grape.  If a grape could be trendy, this one’s it!  It is the most readily available grape being served at popular restaurants these days.  Being served, as in, the “house wine”.  And when I say Malbec, it’s from Argentina.  No other alternatives exist. When they’re serving the Malbec in a restaurant, it’s almost ALWAYS gauranteed to be from Argentina 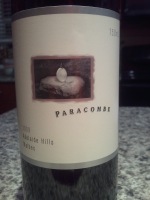 But what if I were to tell you that this post is about a Malbec from Australia?  Whoa…when we talk about grapes from Australia, don’t we mean Shiraz?  Let me tell you, this particular Australian Malbec put the Argentinians to shame!  I kid you not.  This was not your “typical” Malbec!  And I’m glad!  Because to be honest, all Argentinian Malbecs were beginning to taste the same to me.  Enter the Paracombe Malbec from the Adelaide Hills in Southern Australia.  Even better to have it poured in my glass by the winemakers son.  Makes it even more special, don’t you think?

At 14.5% alcohol, one might think that its typical Australian; high alcohol with no real flavours.  This Malbec is incredibly balanced with the tannins and acidity blending in nicely to minimize the high alcohol content.  It has a beautiful nose of mulberries, cinnamon, allspice and a hint of anise. The palate is full of violets and is full bodied, well balanced with a good long finish.  And at $26 on the shelf, it’s not going to break the bank either.

An ode is defined as “a lyrical verse in praise of, or dedicated to someone or something which captures the poet’s interest or serves as an inspiration for the ode.”  No, I’m not a poet, and this is definately not lyrical, but it IS something that certainly captured my interest, and will continue to capture my interest for many years to come.

And now, I hope it’s piqued yours enough to try it.

This entry was posted in wine. Bookmark the permalink.