My Week of Comedic Errors

Ever have one of those weeks when things just seem to always go awry? Yup, I did, but what matters, is that I can laugh about all of it (because it was all so ridiculous), and at the end of the week, I got to drink some fabulous wine, hang out with some fabulous people, and celebrate my birthday all at the same time! It makes the Comedy of Errors not so bad!

It all started on Monday with the boss’s dog leaving me a lovely “package” on the upper level of the store. The boss had stepped out to run some errands, and as sometimes happens, the Cairn Terrier (Islay) gets a bit anxious when her dad is not around. She whines and cries a little bit, but I’ve learned to ignore it. She was seriously out of sorts though, pacing back and forth, coming upstairs to see me more than once, and in my mind I am thinking, “she must need to go outside”. But logisitically, I’m also wondering how I am to do this. I’m by myself in the store during business hours and it’s raining outside. My brain told me to just let her out the back door, watch her until she was finished, but that way I could also keep an ear out if the door chimed and a customer walked in. Yeah…that was the LOGIC side of my brain. The Un-LOGIC side said, ” oh Doug will be back shortly and then HE will take her outside!” I shouldn’t have turned my back, and I should’ve listened to my brain speaking logic to me. Instead, I turned back to my inventory sheets, only to have my nose subsequently violated by the most foul smell I have ever endured in quite some time. According to the boss, whom I texted immediately, telling him his dog had left me a little package, it was the lamb from the day before.

Peachy. (I wished it smelled like peaches in that moment…)

Actually, I didn’t need or want to know what was in that package! The smell got worse, and my thoughts of leaving it until the owner got back could not happen. I had to deal with this. With one hand plugging my nose, the other hand got enough paper towels to plug up a dam. This package was going outside immediately, and I had to do something about that smell! I started running water for the mop bucket, and my body took that time to start gagging. I cannot tell you how utterly disgusting this was, and I almost didn’t make it back upstairs to mop up the residual. Meanwhile, Islay is back in her dog bed, feeling like a million bucks! No more pacing or whining! After spraying much perfume in the upper section of the store, the mess mopped up, I sent this text:  YOU OWE ME BIG TIME.

Shall I continue with the comedy?

Speaking of packages, Tuesday came with a phone call from a driver of a shipping company, indicating they had a delivery for the store and where were we located? After detailing the location, it was then decided that the back door would be best for the delivery. I thought maybe we were dealing with something larger, so I asked the obvious question: “How big is your package?” Classic Freudian Slip…ugh. Instead of asking how big is THE package, I changed it to YOUR. Oh my…Thankfully, the driver just laughed and said…”well, actually…” Nevermind… The package in question got here in one piece, and I still managed to look him in the eye when receiving it, although there may have been a slight smirk on his face. The package contained the bitters we had ordered, although instead of opening it to find ten, there was 40 in the box! 40- 4 packs of bitters? What were we going to do with all those bitters? That saga is continuing, as we are looking to ship back, and I won’t be the one doing that, so there will be no need to explain to ANYONE how big the package is!

Wednesday went off without a hitch, although I almost walked into a door, and I was suprised I didn’t get some some sort of traffic violation into the city and/or back to the store. Our order didn’t show up until 6 pm though. That always makes things interesting, but we at least managed to get it all onto the floor.

Thursday started off well with the day running smoothly, and me in a new pair of shoes. I was gathering wine for a donation, when I tipped a bottle and it fell off the shelf and broke. True story: A $350 bottle of CRISTAL is on the top shelf over in the Champagne section, and it fell to the floor one day without one scratch. We’re talking a fall of 8 feet onto a concrete floor and NOTHING. It just rolled around. But a little $20 bottle of dry Muscat falls a mere 6 inches and shatters. Go figure.

During the clean-up, after throwing (again) massive amounts of paper towel to soak up the wine and help with the glass shards, I tried to step across the puddle to throw more paper towels down. WRONG! My new wedge shoes slipped out and I found myself doing the splits with my a$$ landing in the wine, almost knocking yet another bottle onto the floor! I recalled the scene from Bambi when he is on the ice, trying to get up after he fell…all legs slipping and sliding all over the place, trying numerous times to get up, only to find 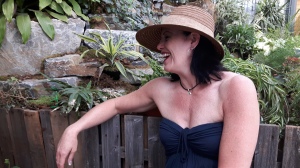 himself doing the splits over and over and over… It’s a good thing I was laughing or I may have noticed just how far my legs actually split. It was actually an impressive sight how limber and agile my legs were in that moment! But, I did have to get up at some point, so with the boss on one side of me, and one of my staff on the other, they helped me to my feet, and through my laughter, I heard them ask me if I was ok!  Yes, I’m FINE!!  A little embarrassed perhaps, but FINE! At that point, I left the wine behind and came to the washroom to assess the damage to my clothing (and new shoes!) and see about cleaning up without having to go home. Good thing I was wearing a long tunic that day, because it conveniently covered the wet spot the wine made on my pants, and after a stroll outside in the sunshine, they soon dried. Nobody would be the wiser!

This brings me to Friday and my last day of work for the week! Are you still with me?!

Friday came and went beautifully with a little celebration along with some great wine and great people! No strange mishaps, packages, breakages or otherwise! There’s nothing like finishing off a week in a smashing way after it started out rather…well, let’s just say interestingly! Here’s to a fabulous weekend, ice cream, a backyard fire, a podcast interview, a birthday, a cruise in a convertible, a steak, and (many) a glass of fabulousness to go with it all! Cheers!