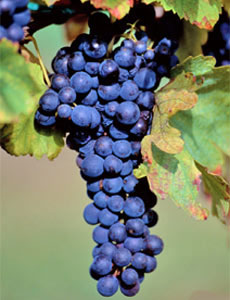 There are some powerful grapes in the world: by that I mean tannins that are full and bold and can sometimes have a tendency to rip your face off. Nebbiolo, Sagrantino, Touriga Nacional, just to name a few. And then there’s Pignolo. The little known grape variety that originates in Friuli. Likely cultivated by the Benedictine monks before the 17th century and well known in the areas of Albana, Premariacco, Prepotto and Rosazzo. Bound for extinction, the last 2 vines were saved in 1978 with recovery work being done since then. Now there are 30 producers making Pignolo, making a bit of a renaissance of this grape. Full bodied, structured, brooding and highly tannic, with an intense bouquet, these wines are certainly meant for ageing. It is considered the “noblest” of all Friulian red grapes. Because it’s so big and tannic, it is best paired mostly with grilled meats and hearty stews.

And true to Italy, the name Pignolo comes from the shape of the bunch – tight bunches in the shape of pigna or pinecone.  They are small berries with a high skin to juice ratio, hence the reason for high tannins.  Our tasting ranged from 2009-2012, so no real chance to taste something really aged. Nevertheless, it was extremely interesting, tannic tongue crushing, and lip-smacking experience!

Although structure on all of these wines was fantastic, they really do need time! Those tannins are sometimes really tough and chewy! That being said, I was thrilled to be able to taste a nothing-but-Pignolo flight of wines as part of the Collisioni Progetto Vino- Friuli! Salute!