It’s Friday, so it must be answer day to the geeky grapes question! I’m happy to report that at least one person attempted to answer the questions, which I received via email! And the individual even gave me the reference of the website they were using to find the answers. Hey, doesn’t matter how they were found, I was happy to receive some answers! I’m also happy to report this individual did really well in the research and other than a few details, got them all right! If you are a regular reader, you know I kind of work in themes, and this week is no exception! All of these wines from this weeks quiz come from the islands of Italy – Sardinia and Sicily. So do you want to know the answers?

Carignano – a red grape grown on the island of Sardinia. We know this grape as Carignan in France and Carineña in Spain. This is known as a traditional grape (as opposed to a native grape) as it arrived in the country via the Spanish. It’s also known as Uva di Spagna (grape of Spain), and wines from old vine carignano can be interesting indeed – velvety, fleshy fruit with soft tannins. 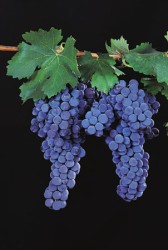 Frappato – a red grape from Sicily, this grape is more known as a blending grape in the Cerasuolo di Vittoria blend (with Nero d’Avola). A maximum of 40% can be used in this blend to help soften the wine. In fact, the more frappato put into Cerasuolo di Vittoria, the lighter and more fragrant it will be. On its own though, this is a lovely pale wine, with lower alcohol (around 12/5% abv) brimming with floral notes of violets, fresh fruits of strawberry and cherry, and some dried herbs. I’m a big fan of frappato, and recently got my wish and now have some on the store shelves!

Nero D’Avola – also a red grape from Sicily, although it’s found in Calabria too (the toe of the boot). For centuries this grape was known as Calabrese, but everyone in the world, including Italians, know this grape much better as nero d’avola. As stated above, it is the main grape in the Cerasuolo di Vittoria blend, but makes powerful wines on its own. It is the second most common cultivar grown on the island of Sicily, everywhere except the northeast corner, and seventh most common in all of Italy. Good nero d’avolas will have dark cherry fruit, some tar, earth and tomato leaf aromas and flavours.

Nasco – a white grape from Sardinia, the name means “musky” which characterizes the

wines aroma. Lots of strong herbal notes as well, this grape can also be used to make good quality sweet wines, of which I have tasted
both versions of (dry and sweet). Many growers of this grape believe that it’s one of the oldest varieties of Sardinia, and potentially the best.

Monica – a red grape from Sardinia, the name alone is pretty enough to make me want to try it (which I have). One of the most abundant grapes in Sardinia, a pure monica is meant to be drunk young and fresh. It is a simple wine, yet lovely with red berry aromas and flavors along with hints of tobacco and smoke.

Grillo – a white grape from Sicily, many may be familiar with Marsala, but not really know about it! Grillo is actually the main grape used in marsala wine (along with cataratto and ansonica).What is interesting about this grape is that it is considered only of Sicily’s highest quality varieties, although its existence on the island seems relatively recent (after the eighteenth century, which for Italy in all its oldness, is indeed recent!) For fans of sauvignon blanc, give grillo a try! It will have a lemony, grapefruit, herbal crispness reminiscent of the sauvignon blanc grape many of us are familiar with.

Vermentino – a white grape from Sardinia, and grown well in Tuscany, but can also be found in Liguria, Umbria, Abruzzo, Lazio and Sicily. Some might know this grape as pigato, or favorita, or rolle (France). In fact, is this grape actually a true Italian native grape, or is it a traditional grape, traveling to the country from elewhere? So, in a way, I guess this was a bit of a trick, and although this grape is found mostly in the southern part of Italy, the largest acreage under vine is in Sardinia. (Side: my next set of testing wines is this grape, one wine from Sardinia and one wine from Tuscany. My goal is to see if I can tell the difference between the two.) I love a good vermentino, and certainly don’t drink enough of it! It has lovely stone fruit notes of peach and apricot, along with some sweet floral notes and ripe golden delicious apple (my favourite apple btw…). Some vermentino can also be aged on the lees (those dead yeast cells that get stirred up into the wine), which always adds a creamy texture to the wine. Added lees will give more tropical fruit notes to a vermentino, and there are even ones blended with chardonnay that will really hit you with a creamy texture. Because this grape is grown by the sea,  most always, a saline tang will be prevalent on the finish. And just to confuse you even further, there is also a red grape called vermentino nera, which is extremely rare, but out there nonetheless!

I hope you learned something about these grapes, and for the next edition of G3…look for the theme, and that will surely aid you in taking a stab at guessing where they are from! See you next week. Salute!