The World of Yalumba

In 1849, a vineyard was planted in Angaston, South Australia, which now makes Yalumba the oldest Australian family winery. Yalumba is also part of an elite group of families in Australia, called ‘First Families of Wine’, with the 12 families owning a total of 5000 ha of vines along with 1200 years combined experience in viticulture and winemaking. That’s impressive.

And just two weeks ago, Ambassador Jane Ferrari came to town to launch “The Caley”, a project to bring an Aussie Claret to the world. Grandson to Samuel Smith, the founder of Yalumba, Fred Caley- Smith was a horticulturalist, correspondent and adventurer, who after 18 months of intense travel to locales such as India, USA, Europe and the Middle East, documented his horticultural findings in letters sent back home. The end result was more sustainable viticulture and how vineyards were managed. Of course, I can’t tell the story nearly as eloquently as Jane Ferrari can, but the history is fascinating, which in my books, makes the wine even more delicious, even before it’s even tasted!

2012 was an epic year for viticulture in Southern Australia, and this incredible wine made from 3/4 cabernet sauvignon (1/3 of that from Coonawarra, and 2/3 from Barossa) was blended with 1/4 shiraz from Barossa creating their version of a “super claret”.  Like many of the world’s winemakers, there is a shift towards indigenous or ‘wild’ yeast, which are naturally present on the grapeskins, to start the fermentation process. This contributes to the complexity and richness of wines, and the Caley is no

exception. No overextraction and jammy flavours were wanted, so gentle pigeage was undertaken to achieve just the right balance of colour and tannin. Yalumba is also one of few wineries around the world that has their own cooperage, the building of wine barrels for the purposes of fermentation, maturation and ageing of wine. Having your own cooperage means specific sizes, wood grains and toast seasoning levels, whenever you need them, for the perfect completion of wine!

For the 2012 vintage, the wine was matured for 22 months in a combination of both new and old barrels made of French oak; using barriques (228L) and hogsheads (300L). After bottling, the wine rested further for 36 months, and was just released 2 weeks ago, with only 5200 bottles made, 60 of those for all of Alberta! That’s how prestigious this wine is, rivaling Henschke’s Hill of Grace and Penfolds Grange for exclusivity.

What a pleasure to be able to taste this wine, and be invited to the inaugural launch of ‘The Caley’, with Jane choosing Edmonton as her starting point. Awesome! On the nose, the wine had strong notes of black currant, eucalyptus, chocolate, violets, and hints of 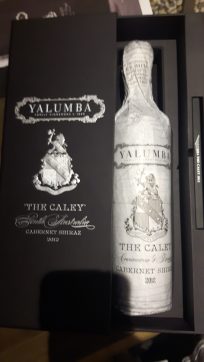 fruitcake. The palate had smooth silky tannins with balanced acid and alcohol, with bursts of black fruits of blackberry and blackcurrant, along with black tea, cigar box and eucalyptus. All with a long, lingering finish. Stunning really, and perfectly described by Jane Ferrari as the ‘George Clooney’ wine – smooth and suave, while the upcoming 2013 vintage (can’t wait for that!), is more like ‘Wolverine’, muscular and powerful! The wine comes wrapped in tissue with a map of Fred Caley’s 18 month journey, and features a book with the history of Yalumba and the wine, all packaged in a beautiful keepsake box.

We’ll get four of these stunners sometime in the fall, and if you want to get your hands on one, it’ll be a SR of around $500.

You know you want one…

4 Responses to The World of Yalumba