Etna and the power of the Contrada

The French had it figured out for centuries. Burgundy was pinot noir. White Burgundy is made with chardonnay, Sancerre with sauvignon blanc, and Vouvray with chenin blanc. Beaujolais is gamay, while Champagne is the classic blend of chardonnay, pinot noir and meunière. The consumer is getting smarter and they know the difference. So why has it taken Italy so long to adapt these same ideas of “place” instead of “grape”? Italian wines as we know it, usually label their wines ‘grape from place’. Other than Barolo/Barbaresco and Chianti Classico, for example, wines from other parts of Italy are simply known by their grape variety name.

Etna wines have been around for a long time. About 30 years ago you could practically give them away. Now, with the power of the Contrada, the producers promoting the area, and the volcano itself, there’s definitely a cache to these wines that there never was before. There are 133 officially recognized contrade on Etna, some being more famous than others. Some quite large, and others small. In the end, it has become a great marketing tool and Etna wines with contrada labeling can now associate themselves with other great Italian wines of the world.

Speaking of contrada, this term can only be used if the grapes come from that specific contrada. The producers of Etna are very serious about where they grow their grapes, how old the vines are, the way they vinify said grapes, and then how they promote the final product to both consumer and importer alike.

The idea of terraces. No machine harvesting here! Photo MJH

In Palmetto di Constanzo, they grow grapes in the Santo Spirito, Caviliere and Feudo di Mezzo contrade . The two red varieties, nerello mascalese and nerello cappuccio are co-planted, harvested and vinified together. The two white varieties, carricante and catarratto, are also planted, harvested and vinified together. However, when new plantings happen, they will be specific and the grapes will be separated. Vine age ranges from 10 years up to more than 100 years old and from 650-800 meters above sea level. Traditional training is called albarello, which essentially, is like a bush vine. Because of this, it’s impossible to harvest by machine; not just because of the training system, but the old vines are terraced on steep slopes, making the harvest even more difficult. The same property can have different soils even within a few meters! The azienda of Palmetto di Constanzo is located close to the eruption of 1879 which characterizes the area of production. Soils even vary in different contrada ultimately creating different styles, textures and flavours in the wine; a big part of what makes these wines so unique.

The concept of contrada is not new, however it’s only been in the last 15-20 years that it has come to light and the producers are bringing the concept to the rest of the world. At Vini Franchetti (Passopisciaro), there are vineyards in many of the more famous contrade such as Guardiola, Rampante, Feudo di Mezzo and Sciaranuova. Sciaranuova ( Sciara, in Sicilian dialect means ‘lava’ and of course ‘nuova’ means new) so the “new lava flow”) vineyard sits at 850m asl with vines between 80-90 y/o.

When propogating new vines, they take cuttings from each specific contrada vineyard, with the baby plants from the nursery being planted in those same vineyards, which keeps the authenticity of the contrada. So Sciaranuova vines to that vineyard and Guardiola vines to that vineyard. In the Rampante contrada vineyards, the vines are 100 y/o and it is one of the most elegant wines they make. These vines are located at 800m above sea level and the harvest in this vineyard is done last as it doesn’t get much sunlight and stays mostly in the shadows. It makes sense. Anything on the north side will be cooler, so the longer the grapes can stay on the vine, the better the phenolic ripeness will be. Higher elevations will have higher acidity, more finesse and the lower elevation wines will be fuller bodied and more robust. 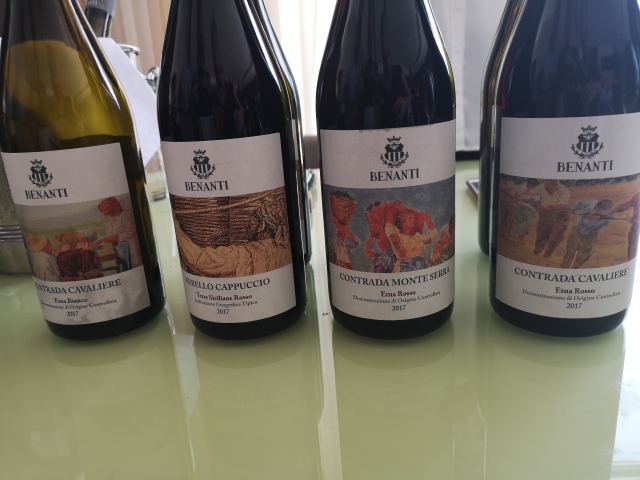 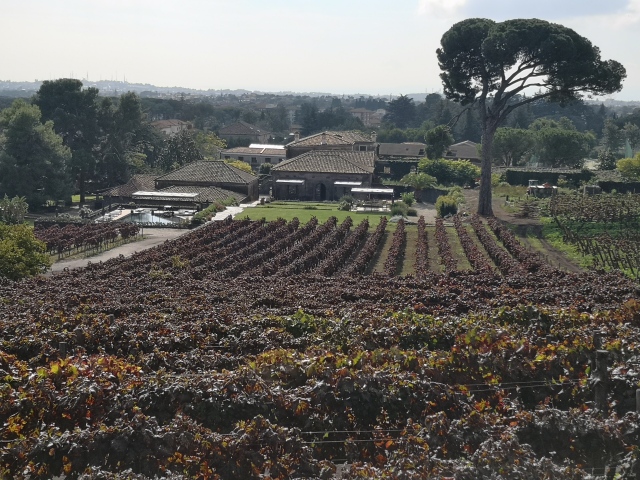 Less well known, are the Southern slopes of Etna, but the wines are no less interesting and equally as delicious and noteworthy. The Southeast is more known for extinct craters; ‘mini volcanoes’ that themselves are older than Etna. One of those mini volcanoes Monte Serra for example, has been extinct since the 1400’s, and like the vines of the north, the slopes here too are terraced, steep and very difficult to harvest. (They are however, very used to that!). Monte Serra is also the name of the contrada, and it is here that much of the nerello cappuccio exists. Playing second fiddle to mascalese, it’s a blending grape that provides colour to mascalese’s pale hue, and also helps tame the high tannins of mascalese. It’s not often seen playing a starring role, (in fact, it’s very rare) but there are few producers that make Cappuccio as a single varietal wine, and we had the privilege of tasting the nerello cappuccio of Benanti along with their contrade wines of the Southeastern slope.

Etna’s diverse terroir makes for a trip of a lifetime for any wino, student of wine, or expert in Italian wines. Thanks to VIA for the opportunity to visit this magnificent island and learn some of the secrets of Mt. Etna. Salute!