I don’t know about you, but the days are really starting to run together…when I woke up this morning, I had to think about what day it was. Ah yes, it’s Saturday. The day when many are off work and enjoying the next two days off. However, if you’ve been home in isolation these past two weeks, it won’t really feel like a weekend anyway. It’s not even like vacation…because you’re stuck inside!

I would be remiss if I did not include South Africa in my list of quarantine wines. They too are going through this (although we certainly don’t hear much about it here). So to pay homage to my friends and fellow wine peeps in South Africa, I must include wines from the Farm I was privileged to be a part of for a month in February of 2018. I fell in love with South Africa after being there, tasted amazing wines, met some fabulous people (who are amazingly generous) and the food! Oh my the food! I was seriously spoiled in SA with the food. (Yes, and everything else)

Journey’s End is a smaller property owned by the Gabb family of the UK and local South African’s run the various aspects of the winery. I spent most of my time in the winery working with Mike & Leon learning about crushing, fermentation, destemming, barrel ageing, and much of my learning came in the form of measuring how the fermentation was progressing on a daily basis. Really cool stuff…IF you’re a wine geek and want to learn about this stuff!

Tonight I’m opening their top end. The Destination Chardonnay 2016 is produced from 17 barrels and only in the best vintages.  It’s named such because “we hope that once opened, this wine will entice people from far and wide to finish their quest for the ultimate Chardonnay at Journey’s End”. (journeysend.co.za). I actually enjoyed a bottle of the 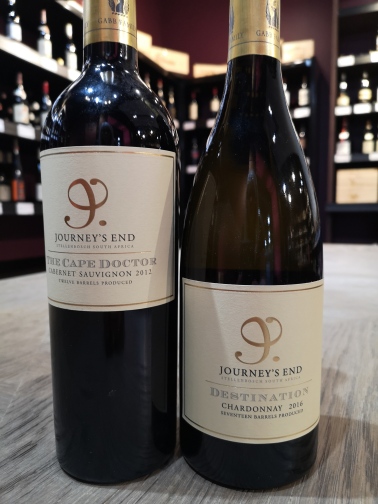 Chardonnay at the beginning of March, along with some friends to go with some spaghetti agli e olio and pork souvlaki. It was awesome then, but it just kept getting better and better as the night went one, and day three was a pretty stunning glass of wine. Notes of lemon cream, spiced vanilla, baked apples, candied lemon, hints of a savoury mushroom and ripe peaches. Just spectacular!

The Cape Doctor Cabernet Sauvignon 2012, is named for the south-easter wine that blows in from False Bay, keeping the berries healthy and also cleansing the air from smog and impurities. Again, only produced in exceptional years and in 2012, it was made from only 12 barrels. Always big alcohol in South African wines (due to the heat) but these are so well balanced! The wine is really intense with aromas and flavours of fruit cake, cassis, blackberry, smoke, cinnamon and nutmeg. The tannins are firm but smooth. No doubt this wine could be put away for another 8-10 years easily!

If you have any South African wine stashed away, tonight is the night to open it! To my friends in South Africa – Gesondheid!