Many of us in #ItalianFWT have crossed over to discuss other regions of the world, and 2021 is a focus on the regions of Spain for #WorldWineTravel. Rioja is a great place to start, given that it’s one of the oldest regions and only one of two with the highest quality designation. I always say “God bless the Spaniards”, because they have done the ageing for us! In fact, it’s not unusual to see Rioja wines aged 10 years, or even more. Currently, I have a 2001 on the shelf at the store – that’s 20 years old and she’s drinking beautifully!

So what does White Rioja mean exactly? Viura is THE white grape of Rioja (also called Macabeo, when referenced to Cava, or other regions of Spain) and traditionally these wines were made in an oxidative style. Expose the wine to air and get all those toasted nutty notes. My fellow writer Lauren from The Swirling Dervish, has already given us a  great review of white Rioja and talked specifically about Lopez de Heredia. She actually OPENED her wines to taste, and I have to say, I was living vicariously through her tasting notes and pairings! I am not yet ready to open mine.

The WHITE of Lopez de Heredia are far more of a cult wine than the reds. That being said, the reds are outstanding, and I have several available for sale at the store where I work. The whites however, are twice as much in price as the reds, and in my store, you can’t buy a bottle of white without buying at least two of the reds as well.  If I didn’t do that, I’d end up with 48 bottles of red and no white on the shelves! That’s the way it is. I named my price and they will sell. These are whites that are capable of great ageing, and their rosé is even more cultish. I’ve got that too, and it will wait patiently in my wine fridge for the right time and the right people to open it with. (Perhaps this summer or fall when COVID is a distant memory? One can only hope…) As you can see by the photo, the age of these wines range from 10-12 years. Sorry, I just can’t bring myself to open them just yet.

What I DID open was pretty spectacular though. The Bodegas de la Marques Valseranno in Rioja Alavesa is a family owned winery, now owned by the 4th generation, and currently being run by the 5th generation. Vines are an average age of 30 years and in their 65 hectares of estate land (along with 15 ha of vineyards they purchase from), tempranillo, garnacha, mazuelo(carignan), graciano and viura are cultivated. The natural underground cellars, which are over 200 years old, are home to the barrels for ageing. 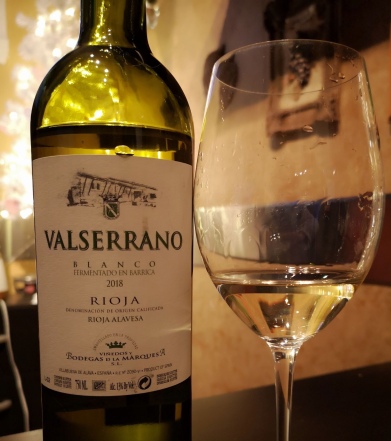 Their viura (macabeo) is grown in the poorest soils, yet at the highest altitudes with great ventilation and the best sun exposure.  Interestingly, the back of the bottle tells me that this wine is 95% Viura with 5% Malvasia, yet the website says they’ve added Chardonnay for extra body and texture. With that said, I don’t know the percantage. Indeed, there is texture, but I feel it’s due to the batonnage stirrings weekly.  It’s also been fermented in new Allier oak, which would of course, add to the all around flavour of this wine. On the nose, I found honeydew melon, Meyer lemon, sponge toffee and hints of vanilla cookie. On the palate, more melon, honeycomb, yellow apple, medium+ acidity, with a nice full body mouth feel (from the lees ageing no doubt), and a slightly oxidative finish that was really quite long. Super impressive! I am a big fan of white wine in general (It never gets the respect it deserves…). Give me a well made, good, ageable white wine and I’m happy! After a long week of work, I didn’t want to cook, so I ordered in for myself and Mr. Joy of Wine. Shawarma was the perfect match to this wine with all the salty, sweet, flavourful combos of the tabouli, chicken, pickled veggies and pita. There was enough body in this wine to make it work! 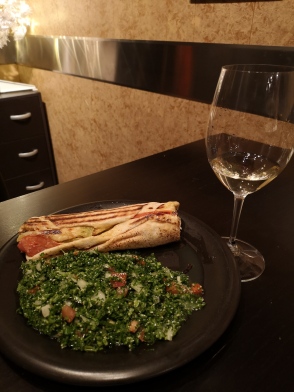 Rioja anyone? Want to see what my fellow writers are talking about? Check out all things Rioja with these posts on #worldwinetravel!