I wrote an article about a year ago for our local provincial magazine called Culinaire – a magazine that focuses on both food and drink from local restaurants, cafes, pubs and wines from around the world. Since my specialty is Italian wines, I’m often pitching different grapes, wine, DOC, etc that I can write about. I’m attaching the article as part of this month’s #ItalianFWT, because I think it’s important for people to understand prosecco and all the good that comes with it!

Everyone loves bubbles right? From champagne all the way down to a simple, fruity sparkler, bubbles just make us happy!

Prosecco is often chosen above a champagne or cava, not only because of its price, but also because it has bigger, sharper bubbles than that of its sparkling counterparts. Champagne’s sparkling wine is made via the traditional method – a second fermentation in the bottle giving it a creamy mousse with fine bubbles – while prosecco is made via the tank, or Martinotti-Charmat method. The bubbles are created during the second fermentation in large stainless steel tanks or autoclaves, and bottled under pressure. That being said, there are many producers embracing the traditional method, and will have offerings in that style.

Before 2009, the grape used in making prosecco was actually called prosecco. With the complications of the area(s) the grape was grown in (which also bore the name prosecco), the name change also became necessary to reduce any possibility of sparkling wine outside of Italy to bear the name prosecco on the label.

Prosecco must be made with at least 85% glera (The prosecco grape’s new name),with additions of chardonnay and pinot bianco, along with lesser known Italian native grapes verdiso and bianchetta trevigiana; the former supplying extra acidity and the latter adding structure. Most producers, however will use 100% glera. You’ll also see varying degrees of sweetness too, with labels on the bottle stating: brut, extra brut, extra dry and dry, with the latter dry, ironically being the sweetest (i.e., higher levels of residual sugar). Having higher levels of residual sugar does not mean it will taste sweet, rather it gives a level of creaminess in the mouth with softer bubbles/mousse that you would not get with an extra brut!

Usually having strong aromas of white peach, apricot, and varying floral notes, one glass will rarely suffice. In terms of quality, one might think prosecco is prosecco and what might be the difference from one bottle to another? That’s where you couldn’t be more wrong! 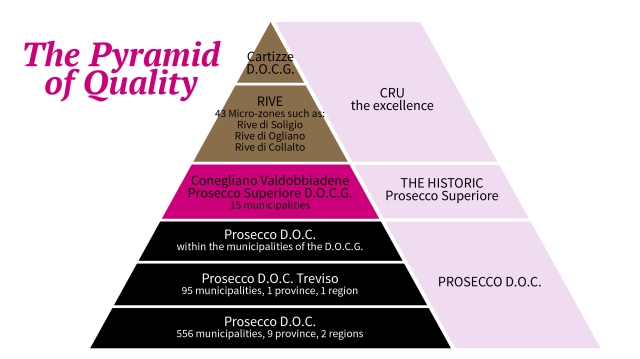 The prosecco pyramid is made up of four (main) zones, representing various levels of quality. The bottom level is represented by Prosecco DOC (Denominazione di Origine Controllata), comprising 556 communes (villages). An area this large in size would most assuredly have varying levels of soil types, microclimates and exposures. There are many Prosecco DOC to be had and some can be lovely, however, there are also many that might be a cheap, industrial style available everywhere with nothing to set them apart. Next up on the pyramid is the Treviso Prosecco DOC that can be made in 95 townships. Like the basic Prosecco DOC, these wines can range from insipid to solid, and even outstanding. They will almost always have more texture and complexity of flavours than entry level Prosecco DOC, but the price point doesn’t always show that. Bellenda Prosecco in the Treviso DOC level is simply lovely with it being extra dry, it would sit around 12-21 g/L RS, which makes it perfect for your Bellini or Aperol Spritz! On it’s own, it showcases the typical white peach aromas and flavours that glera is responsible for.

Valdobbiadene-Conegliano Superiore is the DOCG (Denominazione di Origine Controllata e Garantita) for a reason: in a band of both flatland and hillside vineyards that extend from the towns of Conegliano to Valdobbiadene, it’s here that some of the best prosecco is made. Located approximately 50 km north of Venice, the region boasts a unique microclimate with the Dolomites to the north keeping the cold breezes at bay, yet bringing in the warm winds from the southern Venice lagoon. The soils of Conegliano are rich in clay, providing firm, structured wines, whilst the higher hillsides of Valdobbiadene translate to highly aromatic and fresh wine because of sandier soils. 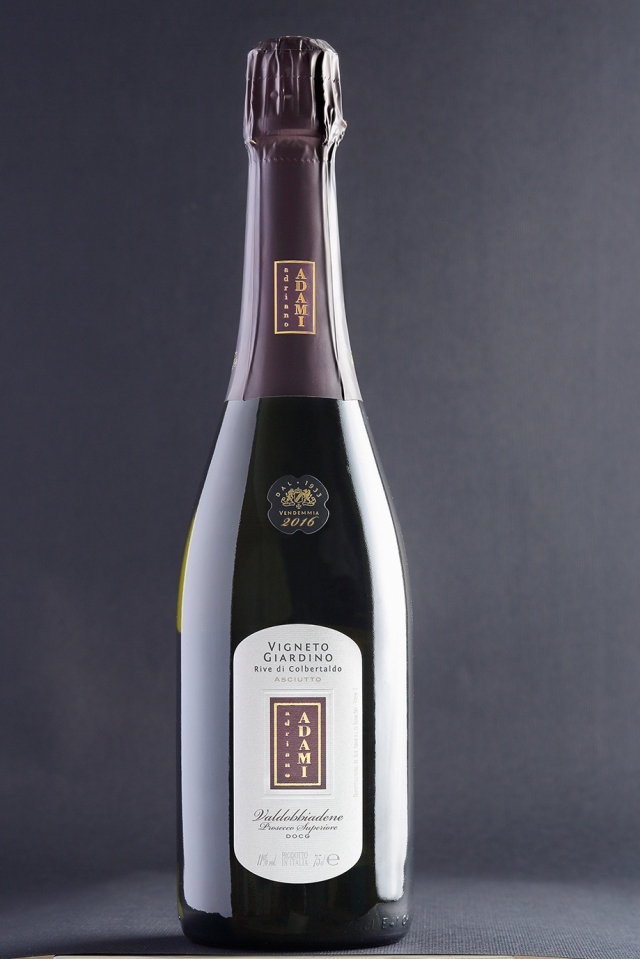 Producers will often blend grapes from these two areas to create the perfect wine.

In the Valdobbiadene zone, 43 single vineyard sites have been identified, being noted with the word rive on the label of the DOCG wine (part of the Cru level of prosecco). In other words, grapes from the steep hillsides – like Mosel in Germany – must be harvested by hand. There are lot of hours involved to make not just Valdobbiadene wines, but Valdobbiadene rive wines also. Ruggeri is a premier producer in the region and their Giall’Oro Extra Dry is a classic, award winning example of DOCG Valdobbiadene.

Adami Vigneto Giardino Rive Colbertado became one of my favourite prosecco during a tasting I delivered that showcased quality and sweetness levels in prosecco. Sitting around $41 CAD on the shelf, it’s prosecco at its finest with a label stating extra dry with a sweetness level around 21 g/l RS. Delivering acacia flowers, wisteria and white peach aromas and flavours along with some great minerality, it is solid with a full mouth filling creaminess, this prosecco is glera at its finest and purest and called Superiore for a reason.  Pair it with creamy risotto, melons, fruit tarts and foccacia! A simply stunning prosecco!

While rive prosecco certainly have a caché of their own, the top of the prosecco food chain undoubtedly belongs to Cartizze. With only 106 ha of land making up this Grand Cru, it’s here that you will find some of the most varietally correct, intensely perfumed, elegant (and expensive) prosecco. If you happen to have a spare $1.2 million lying around, you too can have a piece of Cartizze! Due to its great reputation, Cartizze is currently the most expensive vineyard land in all of Italy (in some cases even more than Barolo in Piemonte!) Keep your money though – there’s no land for sale anyway!

It just might be a life-changing moment when you taste Cartizze so ensure you’re in good company when you do! The iconic family producer Bisol is one of the originals and certainly know what they are doing when it comes to prosecco. They have been around since 1542 and with their rich history their Cartizze can be expressed with only one word: Elegance. This Cartizze Superiore has 25 g/l RS (so fully in the dry scale of sweetness) and is rich and creamy in the mouth with quintessential white flowers, white peach, pear, acacia blossom and hints of yellow apple. What can I say? Prosecco at its finest – share only with those who would appreciate its quality! Salute!

To learn more specifically about Prosecco Superiore and Prosecco DOCG, my colleagues at #ItalianFWT have been sponsored by the Prosecco Consorzio and have written on their findings. Have a read!

7 Responses to Prosecco – What’s Really in the Glass – #ItalianFWT